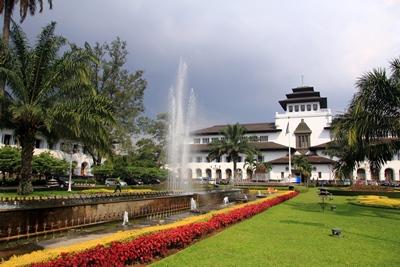 Kota Kembang (the City of Flowers), Bandung, is more than just the capital of West Java Province. The city has grown into the largest metropolitan in the province and a highly popular travel destination thanks to its culture, creativity, and romantic atmosphere. This is shown by the blend of modern city architecture with a classic atmosphere, wrapped in Sundanese cultural hospitality. In fact, the beauty of this city in the past has been said to resemble the beauty of European cities. This is what made Bandung to be known as Paris van Java, or the Paris of Java.

Bandung and Jakarta are like close relatives with only about 140 kilometers apart. From Jakarta, Bandung can be easily reached using land transportations, within 2,5 – 3,5 hours in normal traffic conditions.

Among all the land transportation options, shuttle and bus are two of the most commonly used to reach Bandung from Jakarta. Some of the most popular travel operators for this route include Cititrans, Daytrans, Pasteur Trans, Jackal Shuttle Holidays, Areon Trans, Big Bird, and MRTrans. Meanwhile, for the bus operator, this route is served primarily by DAMRI.

Things to Do in Bandung

Most people immediately pictured a calm, romantic, classic, but lively atmosphere when talking about Bandung. Both solo and group travelers certainly have their own favorite destinations and activities in this city. For the young, Bandung is very attractive especially because it has a lot of hangout spots with unique designs and delicious culinary, as well as factory outlets that serve as a source of fashion inspiration. Whoever you are and whenever you have time to visit Bandung, make sure to explore the interesting places below.

Other Bus & Shuttle Routes from Jakarta

Other Bus & Shuttle Routes to Bandung